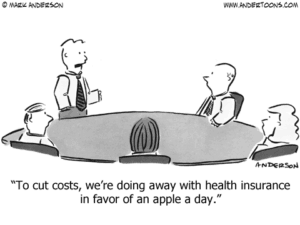 Submitted as a family member by: W. Paul McKinney

Providers of healthcare and their families occasionally find themselves consumers of costly medical services and only then realize the complexity of the system that laypersons must deal with on a routine basis. As a physician and father of a medical student who had a traumatic injury on the grounds of the hospital where he worked, I learned only too well the Byzantine nature of the insurance accounting and billing component of our healthcare system.

In the midst of seasonally cold weather in January, my son tripped on an uneven paved surface just outside the hospital where he was reporting for the first day of his assignment and landed with his left arm extended, because his right arm was carrying reference books, absorbing the impact on his left shoulder.  This was a most unexpected accidental event for a long distance runner who also worked out in the weight room regularly. Unable to move, he was carried to the emergency room where the student clerk became the first patient of the shift.  He was seen by the usual array of interns, junior and senior residents, fellows, and attending physicians who were able to establish the diagnosis of shoulder dislocation using an x-ray, achieve anesthesia, and reduce the separation. After a shoulder immobilizer was placed, he was on his way with opioid analgesics.  He later elected to have surgery to repair the structural damage and thereafter needed to sleep in a recliner for several weeks to avoid interference with healing. Regular physical therapy then began with a dozen or more sessions needed to achieve the targeted mobility. Interval follow up with the orthopedic surgeon was of course required as well.

By the end of the range of treatments, he had received a dizzying array of bills from the physicians who saw him, from the ER attending to the radiologist, orthopedist and anesthesiologist, the laboratory, the hospital for facilities usage, the outpatient surgery center, the pharmacy, and of course the physical therapist. Each was neatly submitted by a separate organization, the hospital, professional service corporations, the laboratory, and physical therapy offices. The overall total amount billed was almost $40,000, an amount that would have driven him into financial chaos without dual insurance coverage through his wife and our secondary insurance policy for this 25 year old dependent under one of the new stipulations of the Affordable Care Act.  Dealing with the payments, though greatly reduced from the initial bill, required a phenomenal amount of paperwork and repeated inquiries to providers and insurance companies, especially with respect to the secondary insurer. Under current law, secondary insurance providers cannot obtain the information they request from the primary insurer but require the insured to provide all original bills as well as statements of benefits provided from the primary insurer. This is a particularly time-consuming and unintended consequence of current healthcare law that places an undue documentation burden on care recipients.

A simple retelling of this tale of how a moment’s error was able to change a person’s life for months and incur a remarkable amount of debt should be ample evidence for anyone that insurance coverage for the young is absolutely necessary, despite the presumed invincibility of youth. It also conveys a sense of the enormous effort required in coming to grips with the insurance coverage and billing process.  Without a team approach and support of personnel skilled in these processes, he would never have been able to manage the reams of financial statements generated and the endless requests for additional copies of documents that had already been sent.

The practitioners of medicine in the U.S. are doing a great job of managing challenging problems. The system of healthcare, however, is badly broken. The costs of care are known by most to be consequential and on the rise. The costs in terms of the patient’s time spent addressing a mountain of paperwork submitted by a highly fragmented array of providers are less well understood.  We must not lose sight of either aspect in the process of repairing the system.